Home » Prepare » Should I Give Money To Beggars Whilst Travelling?

13 years old. Wide-eyed, totally confused about my inner self and drenched in the blackest of the blackest goth attire because, hey, it’s the year 2000 and nu-metal has completely engulfed me. Stomping forwards in my ruby-red cracked DMs with no real grace through the streets of London, Brixton, I’ve just pulled myself out of the darkest, sweat-inducing, beer-flowing walls of the Academy. I’m high on the electrifying riffs of Slipknot and dizzy from all of the thrashing and mayhem. I charge like a baby rhino towards the tube to return home, because my parents have warned me, people ‘are going to rob me for every penny’ here. Head down, ploughing through, ascending the concrete station steps, nearly there then… 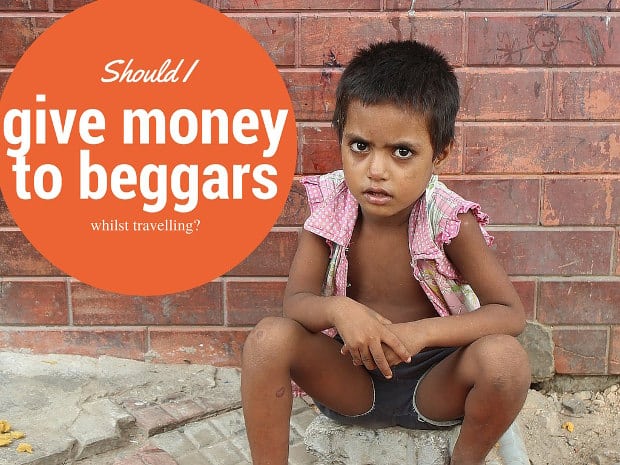 People pass each other without any recognition everyday. Everyone has an intricate, complicated, rich story about who they are and how they came to be. Whether you choose to register others, is a decision made in a split second and then you’re gone…or you decide to open up your blinkers and halt. The guy’s presence, his energy, his attitude, his sheer comical value: something within him grabbed hold of my blinkers and ripped them right off.

Propped up against the stairwell’s walls, this homeless guy and his dog are beaming with light and pulling me in. Without any hesitation, I give him £10 from my newspaper round job. The £10, a minute ago, I was protecting like the Queen’s jewels.

That was the first time I ever gave to someone begging for money and since then, countless people have asked me for that £10 again.

To give or not to give?

On any given day, travellers are faced with the decision of whether they should stop and give money to the people who ask for it. It’s everywhere, whether it be outside that pub in the middle of nowhere, in the craziest city or on the most beautiful beach.

Some people are blazingly obvious when they ask for money. They’re crouched on the street, walking through the carriages of the subway holding signs, singing, parading their child around, or in one case I saw in China, using a megaphone to proclaim how much they need the money. Other ways are more subtle. On tours, the guides have told me they’re not earning enough and need more. Tricycle drivers in the Philippines have told me they cannot feed their families and to give them extra. Cambodian children have tried to sell me postcards and bracelets then ask for more, saying their parents will beat them if they don’t bring home enough.

It’s a difficult situation and the angel and the devil on each of your shoulders can begin to get heated and battle it out with each other.

‘I have more money than them / I could do a good deed today / It’s just *** pounds / They look pretty goddamn hungry, tired, in need / This sucks, they need help / Be a nice person / They’re telling the truth / They’re genuine / My friend has just given them something so don’t look like a cheap-ass now, give them some money too’

‘Don’t get robbed blind / They’re connected with the mafia / They must be making loads of money / They have enough money in their pot, they don’t need mine / Do they think I’m that stupid? / Don’t fall for that one / I can’t believe they’re dragging their kid round like that /  They’re gonna spend it on drugs’

Should I give money to beggars whilst travelling?

It’s a tough one to answer but here is what I think:

Don’t give them the money. If they’re hungry, give them food (apart from the milk scam in Cambodia which I sorely learnt about in Siem Reap!) If they’re cold, give them some warm clothes. Once you give them money, they’re gonna keep asking for it and this can bring on a lot of different problems. Heard of people purposely being disabled in order to beg for money? Not cool. Heard of kids not going to school but begging instead? Not cool. It’s a never ending  viscous circle and I feel that as tourists, we need to think carefully about our impact on other cultures and the relationship that we have with locals.

To put things into perspective, here’s a cautionary tale about what happened to me in Coron Town in Palawan, Philippines. All the kids I met wanted to hang out, play and practice their English. They never asked for anything from me. Then, one night, I was walking down the street and a young boy approached and said, ‘Give me money’. ‘What?’ I replied. ‘Give me money’ he insisted. My heart sank, because this is the start of something bad. If one tourist gives that kid money, he’s going to keep asking and all of his mates are going to cotton onto the fact that they can do this too. That is going to spread like wildfire and before you know it, everyone is asking and depending on you. Coron has been ticking along nicely so far, why disrupt that and turn it into something it shouldn’t be? 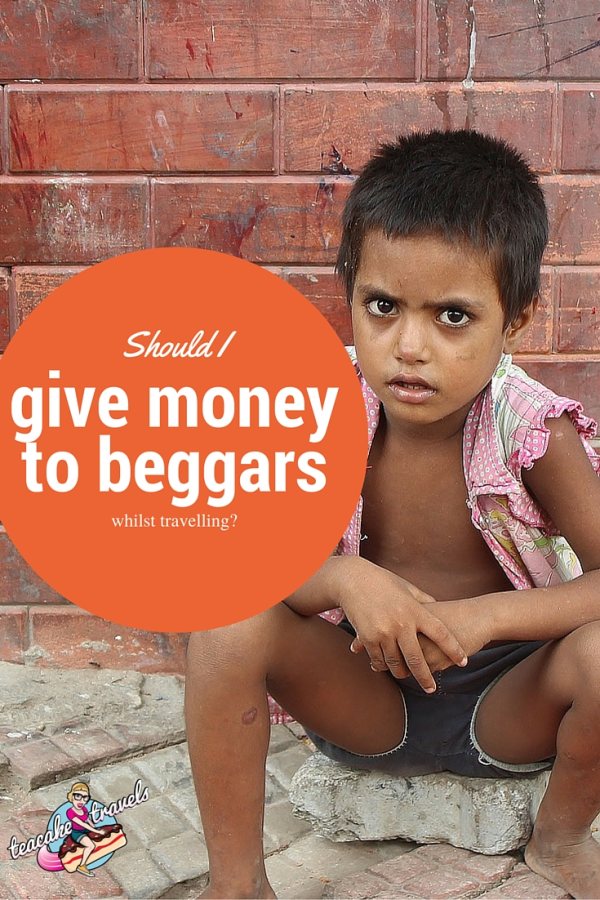 Should I Give Money To Beggars Whilst Travelling?