How can you get El Nido Palawan right first time? There are so many things to do on El Nido Island Philippines. When I first started Teacake Travels, El Nido was the first place I ever visited with my laptop and notebook. I desperately wanted to go and explore its delights that I’d heard of through the grapevine. Unsurprisingly, it doesn’t disappoint whatsoever!

Getting to El Nido is easy so what are the top things to do in El Nido? This delightful little guest post from ‘Let’s Palawan’ suggests 5 El Nido attractions ideas to pop in your pocket. Let’s go! 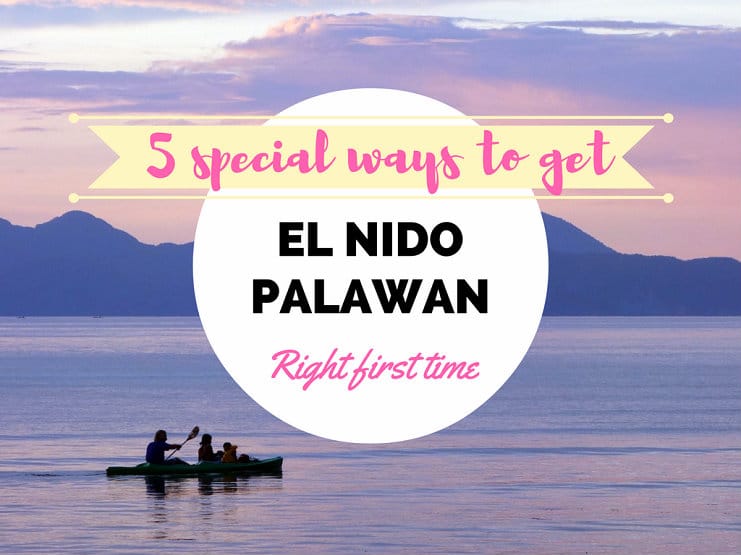 Whether you’re an avid sightseer or someone who occasionally takes short trips, to travel is bliss. Nothing is more fulfilling than having to spend time exploring unfamiliar places and for us to gather pleasant memories from it all. 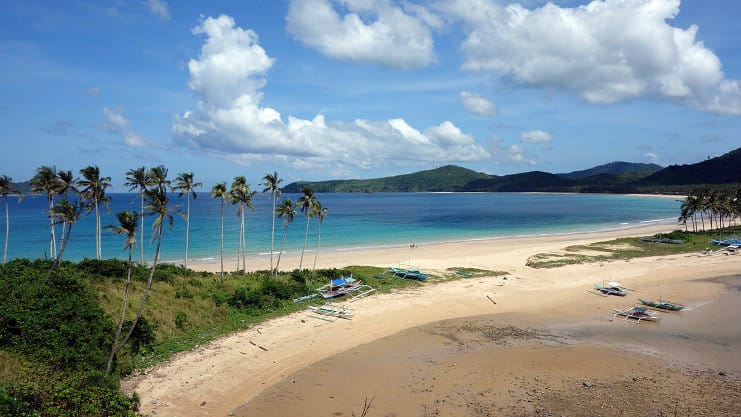 But sometimes, things can become repetitive when we do the same activities throughout the course of our adventures. What is supposed to be an awesome activity can turn into a dull experience when we find ourselves doing it again and again. That monotonous feeling is certainly not something we signed up for! How can we solve it?

Go All Out And Travel To El Nido…And Do It Differently Than Other Places!

Just because you’re journeying to a tropical destination, doesn’t mean you have to get stuck into doing the ‘typical’ island adventures. El Nido is known for its extraordinary character that creates a unique and incomparable travel experience. Here are the special things you can do when you’re in El Nido, Palawan.

1.Gaze At The Enthralling Sunset At Las Cabanas

When you tell people you’re heading to El Nido, most of them will tell you to not skip the heavenly warm glow of the Las Cabanas’ sunset. This natural art show hanging out in the high heavens will be one of the most breathtaking performances your eyes will ever lay on! To get El Nido Palawan right first time, make sure to head here! 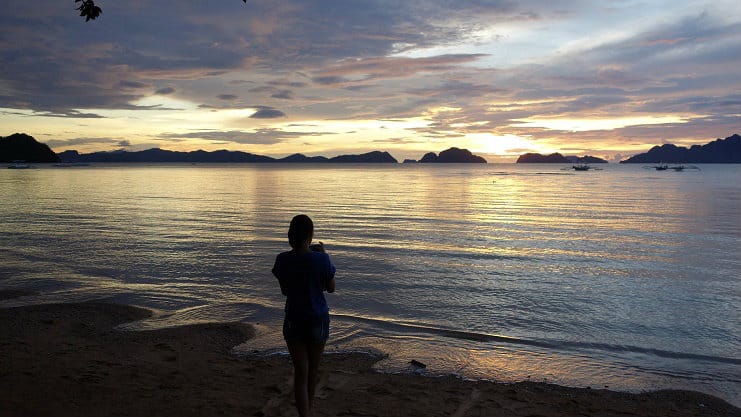 With its wide coastline and wonderful seascape, spending time by the beach with this going on is priceless!

Teacake Tip: if you’re short on money and hanging out in El Nido town, this secret sunset may be a better option for you (no tuk tuk fee to get to Las Cabanas’ further away!)

Everyone visiting this island is looking for those extra special El Nido attractions. Out of all the El Nido activities on offer, what could be more authentic than spending your time on this island’s renowned white shores. El Nido beaches are absolutely amazing! 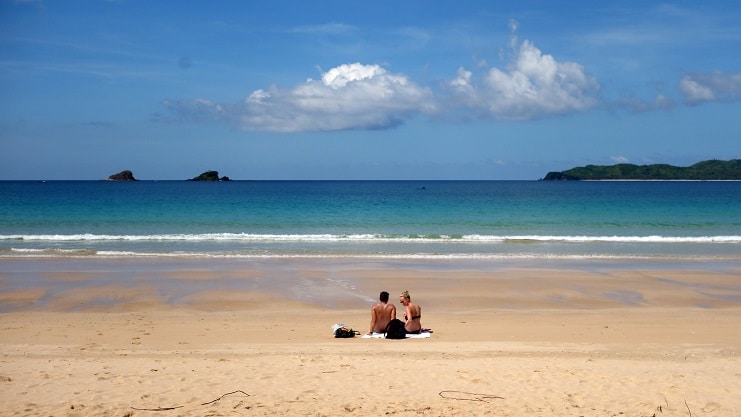 Some say that camping is the quintessential adventure in El Nido next to island hopping and underwater tours. If you have time, make sure you do both!

Teacake Tip: Island Hopping in Puerto Princesa is also an absolute treat if you’re heading there whilst you’re on Palawan. Make sure to not miss the Underground River Tour too! 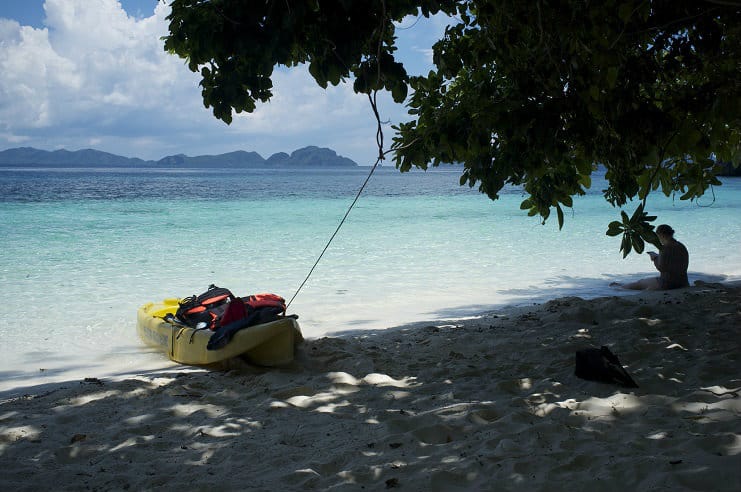 Most people who travel here love spending time along El Nido’s coastline. They enjoy the experience so much that at some point, they really do not want to leave. Hence, they end up putting their tents up along these broad shorelines and spending their entire day devouring the magic of El Nido Island!

In El Nido, you don’t only get to explore its theatrical beach scenes but can easily get caught up in the fun of exploring its wilderness. Just look at these rocks! 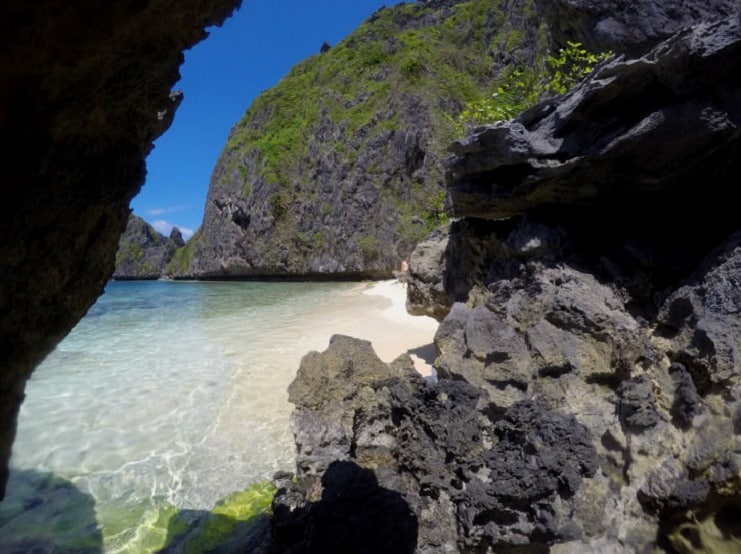 Climbing the Taraw Cliff is considered to be one of the premium achievements anyone can have when visiting El Nido beach Philippines. Get El Nido Palawan right by putting yourself up for this challenge! Trek up the staggering limestone karsts and you will uncover the phenomenal beauty of this island, showcasing its sweeping views of astounding cliffs, sparkly white sands and clear turquoise waters. 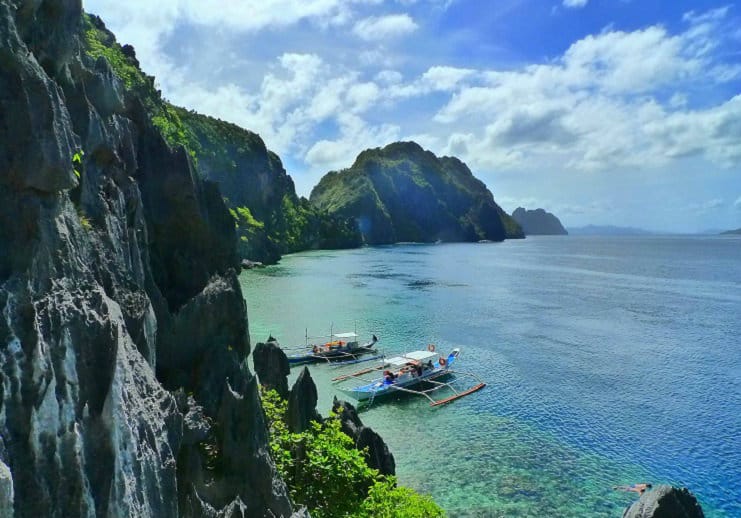 On El Nido Palawan Island, every corner of this escape is considered a perfect spot for unwinding. In fact, all it really takes for you to settle into your “peaceful corner” is to spread yourself out on a mat or get into a hammock and…do nothing. 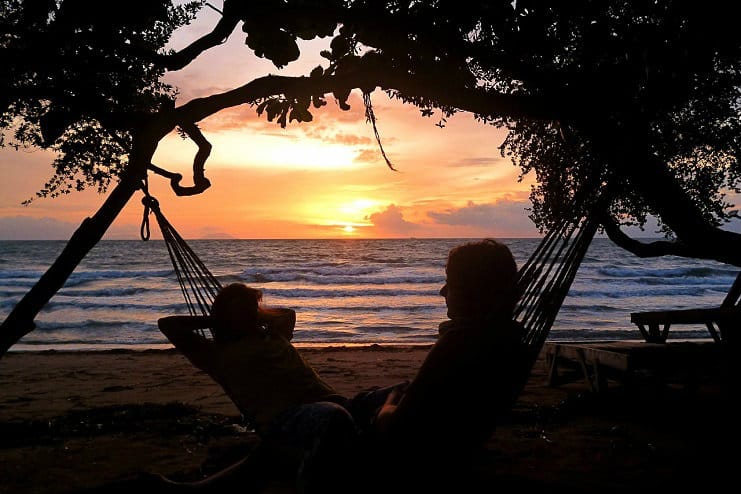 Now that’s easy to get El Nido Palawan right first time! In addition to this, the dramatic scenic views unfolding before your eyes make this experience effortless!

The Best Places To Sleep In El Nido 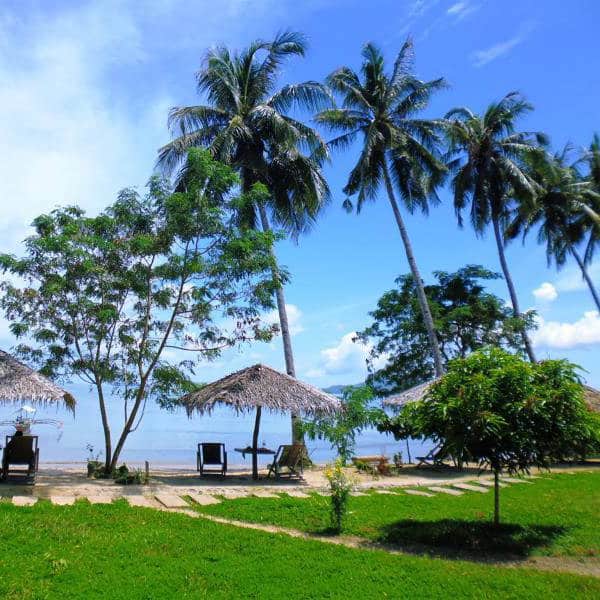 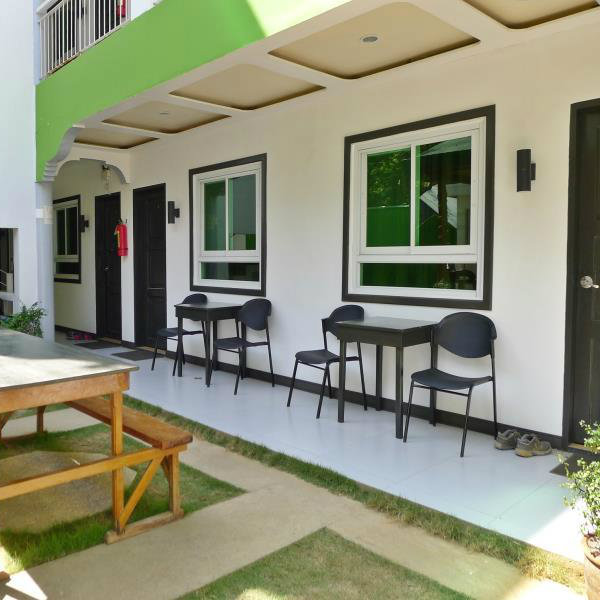 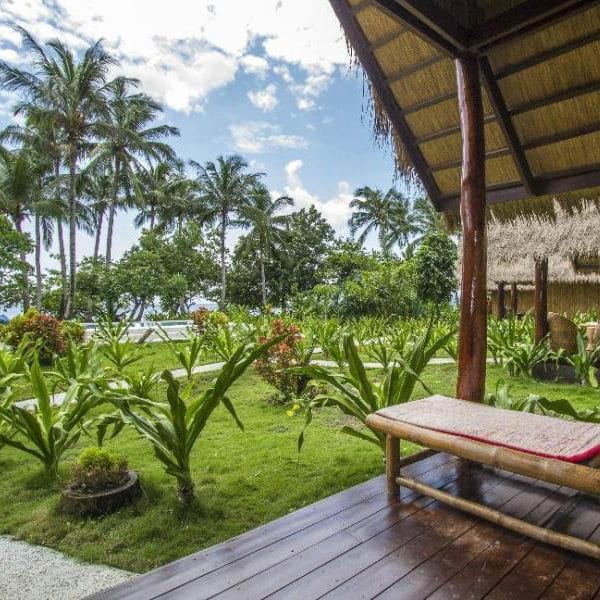 5.Savour The Remote And Quiet Coves

Even though picturesque views can be seen all over El Nido, the experience of catching a glimpse of various seascapes and landscapes during the course of your travels will not feel mundane. Amazingly, these sensational sites of mountain ridges and the wide open sea bring nothing more than astonishment and happiness. Bliss! 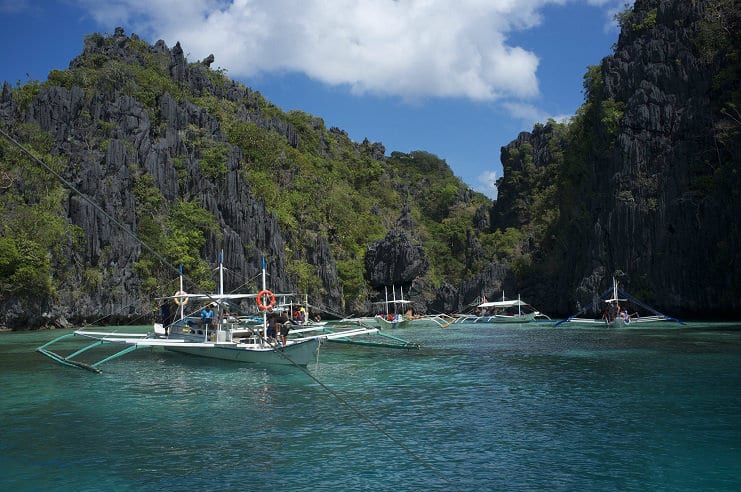 There is nothing more soothing than getting rid of the bustling sound of the metropolis. Though remote and quiet places are a challenge to find these days, the untainted beauty of El Nido opens its doors for everyone yearning for that promise of tranquility.

There is a reason why El Nido remains a well-liked travel destination and the most sought after tropical getaway. It’s beauty is endless. If you wish to travel to El Nido, you’ll be receiving Mother Nature’s greatness at its finest!

Explore places, discover cultures and traditions and most importantly, have fun, making the best memories of your travels! See you in El Nido!

Want to know how to get to El Nido? Check out this easy Travel To El Nido Guide.

Are there any other special experiences you know about in El Nido? Comment below! 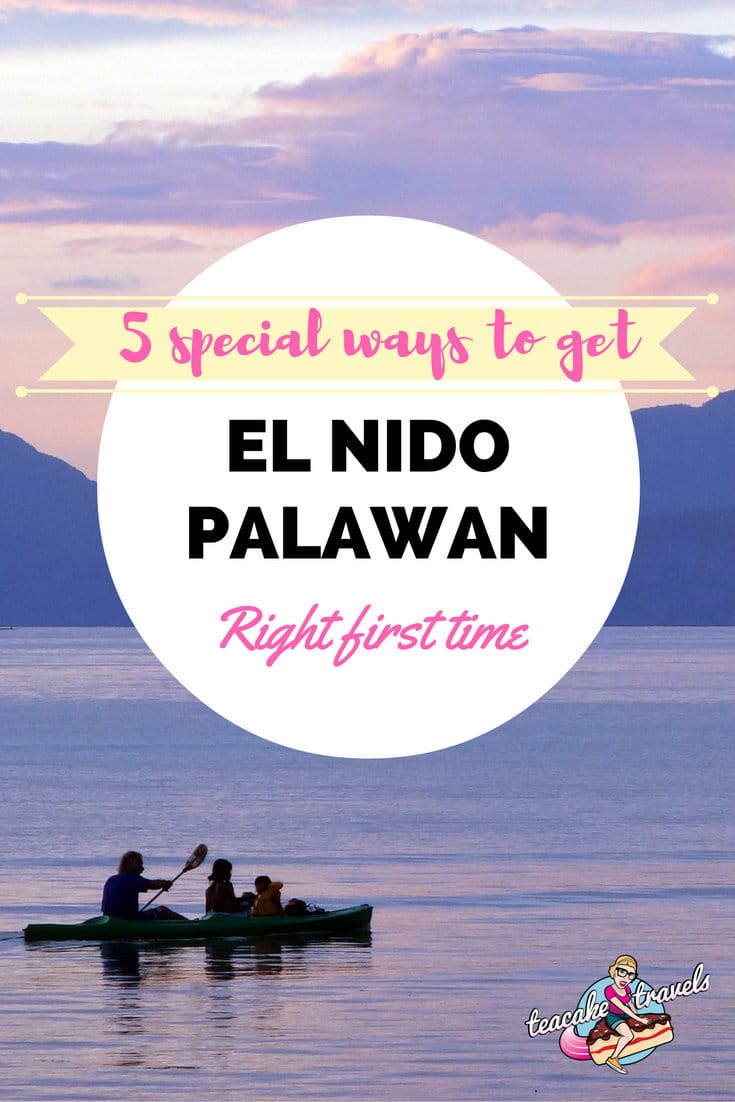