Back in May 2013, I was lucky enough to catch the last glimpses of the desolate, fizzy pop mecca of Pepsi in Battambang.  When I arrived, a few men were carting off antique machinery and left me to it.  This super cool factory unfortunately got into the claws of the Khmer Rouge in 1975 and was promptly shut down.  It stood there firm in the ground until September 2013, until it was regrettably torn down with its fate sealed to be transformed into a water plant.  Read on to step inside a piece of history which has unfortunately crumbled and been swiftly thrown into Cambodian dust. 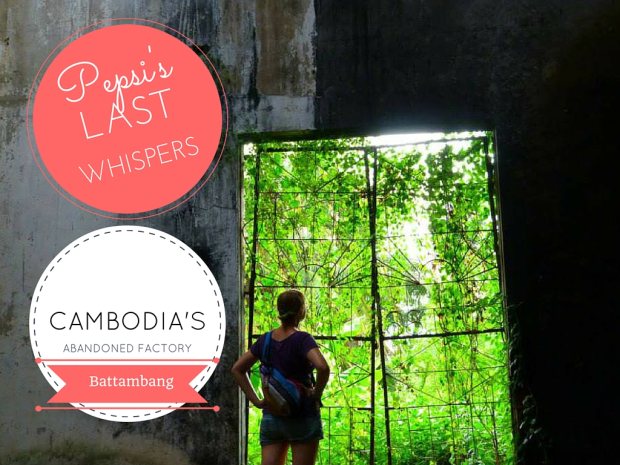 Old school bottles, which if I had known were to be destroyed only a few months later, I would have rescued in true Teacake heroic fashion

As I wormed my way inside, I slowly stepped through the shadows to emerge into this beautiful light-filled factory floor

If only I was a magical pepsi factory machinery expert: I would love to know how this place originally looked.  Standing there and listening to the wind, imagining what once was, was nonetheless a pure pleasure within itself

Time moves on, all good things must come to an end, say goodbye to what once was and let in new beginnings

As I stood admiring the nature breathing heavily against the metal gates, I began to hear growls in the distance.  The dogs had caught a whiff of Teacake’s chops and I swiftly exited running like a disorientated chicken.  I had been chased by dogs already in Thailand.  No one needs a repeat run of that.  But it did happen again the month after when I drove through a boarded up road in Vietnam.  More about that later…

7 ways Travelling Changes You For Better And Worse

Owning A House Is My Worst Nightmare
Scroll to top