Home » Storytime » That Time I Almost Died in Thailand

If I had been born a boy, I would be Tommy. Gutsy, curious and pushing his personal boundaries to the limit, we’re wonderfully similar. I was recently back in Thailand getting up to all sorts of tricks and Tommy asked if he could contribute his own crazy tale of his travels there. Of course, I instantly said yes! Find out how he almost died in Thailand here… 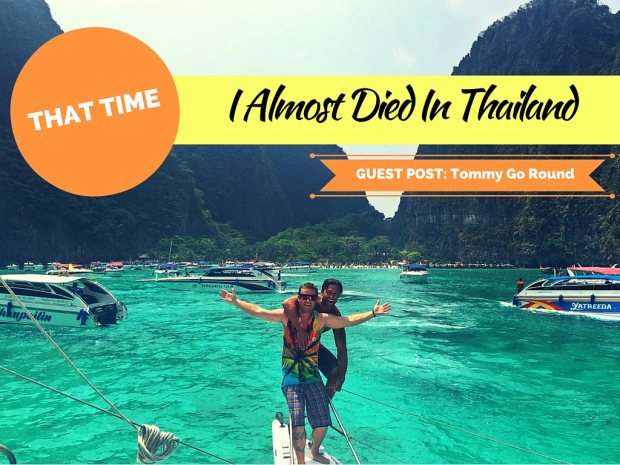 I Almost Died In Thailand

A funny thing happens to you when you travel long term. You get pulled out of your comfort zone so much that it almost becomes natural. At first it’s tough for anyone. Are you an introvert? Too bad. The entire hostel is having a party and you have no choice because there are people in your room taking shots and listening to The Weeknd. Extrovert? Too bad. That train ride from Bangkok to Chiang Mai is 15 hours and you’re the only one who speaks English.

After a while you get so used to being uncomfortable you almost crave it. You start taking risks that you would never take back home. I can’t count the amount of people I know that crashed a motorbike in Asia and got right back on one the second they recovered but would never get on a motorcycle in the States, where it is arguably more safe. Little by little your fears get conquered making you a stronger and more confident person in any situation. But things don’t always go perfectly… 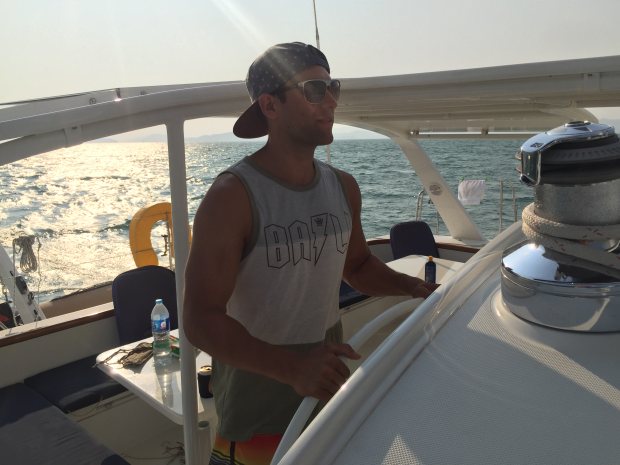 The Trip Of A Lifetime in Phi Phi

People close to me have said that I tend to have so many good things happen to me, they have coined the term “Tommy Luck”, or as my Canadian friend likes to say, I have a “horseshoe up my ass”. What happened in Phuket in March of 2015 could not have been a better example of that. My friend Kelsea posted on Facebook that she was currently on the large Thai island we were on. Kelsea was more of a friend of a friend and I only hung out with her one time before that, but I figured I’d invite her to come hang out anyway since we happened to both be in the same distant place half the world away from where we call home.

After a night of drinking and failing to hit every strip club in Patong on the way to the beach, Kelsea asked my fiend Will and I if we wanted to go sailing the Thai islands on her parent’s 55-foot catamaran. After a couple minutes of Will and I asking her “Are you shitting me?” and deciding that our destination would be Phi Phi, my bucket list island, we gave a simultaneous “Fuck yes!”

Now I don’t know anything about boats, but this thing was probably the Porsche or Corvette of sailboats. It was two stories, had 3 bedrooms, trampolines, paddleboards, a smaller boat on the boat, breakfast and dinner tables, and a fully stocked kitchen. Will and I had hit the jackpot, but the people on the boat were the best part. Kelsea’s parents were a loving couple that had just sold their boat charter company in Hawaii to sail around the world for the rest of their lives.

Her dad Dave was probably the most interesting and confident person I had ever met. He told us amazing stories such as the time he took a sailing job when he was 18 that required him to navigate using only the stars from California to South America. He lied about knowing how to it, and just figured it out on the way by reading books during his journey about star navigation. Say no more, this guy was my hero. 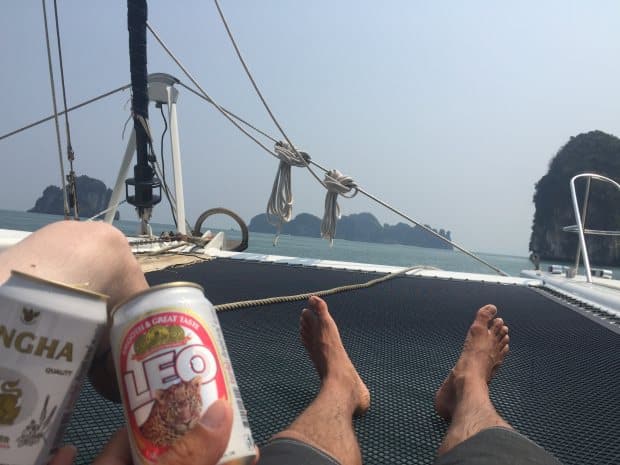 Tommy showing the world how to relax like a pro

After a few days of learning the ropes of sailing, having dinners on tiny islands that no other tourists had probably ever visited (anyone been to Lolita?), and drunkenly skinny-dipping with phosphorescent plankton, we finally made it to Phi Phi. We dropped anchor at an unrecognizable location far from the touristy pier.

Dave had sailed to Phi Phi before, and told us about a watery cave he found while exploring the limestone surrounding the island. The idea of swimming through a pitch-black cave scared the crap out of me, but everyone was down and I trusted Dave. An honorary Golden Rule of Travel for me is “If It Scares You, Do It”.

Into The Mouth Of The Cave

We grabbed our flashlights and snorkel masks and swam towards the cave opening. Behind us was crystal clear water with huge rocks bulging out, bobbing boats, and perfect sunshine. In front of us was a skinny pitch black hole that we slowly started to float into. Dave was in front of me leading the way, Will and Chelsea were behind me. Within seconds, all light disappeared besides our tiny flashlights, which are pretty useless when you are holding one while trying to wade forward through water. I don’t know how deep into the cave Dave and I got, all I knew was Will and Chelsea were no longer behind me.

We had only been slowly swimming forward for about a minute. Suddenly, the entire cave filled with water as an angry rogue wave from outside passed through. My body shot up and my head smacked into the rocks on the top. The water did not receed in the slightest as I could barely make out a blurry underwater version of Dave in my light turn around and point his finger in the opposite direction, cheeks puffy with his possible last breath of air. I used the narrow walls, which were only about 3 feet apart, to spin myself around. In the pitch-blackness all I could see were stars from my head injury.

I swam as fast as I could towards the direction of the cave entrance, my arms getting cuts and scratches as they stroked the sharp rocks on both sides. Although in reality the length of the swim was pretty easy for most swimmers, in my panicked state, in the complete darkness, and without getting a chance to suck in any air beforehand, the cave exit felt like a kilometer away. Slowly I could see the light get brighter as I made it out, Dave following shortly behind me.

If that wave hit a minute or so later, we would have been much further into the cave and we would have been dead. Will and Kelsea were waiting for us outside scared for our lives. It turns out they never even entered the cave because they thought it was too dangerous.

All I could say when I saw Will and Kelsea was that I accepted death, only half joking. I looked at Dave and all he could say was “Yeah…sorry about that” and something about how the tides usually aren’t as high around this time. Apparently even superheroes like him make mistakes, but I would never blame him. If I had to die somewhere, the number one place on my bucket list would not have been a bad option.

I’m already a bit claustrophobic and not a huge fan of caves, so that experience should have stopped anyone like me from ever entering another water cave, yet that was not the last time I swam through one…that day. As it turns out, the giant mountain of limestone we were swimming through contained several caves.

Dave showed us how to spot them by swimming around under water looking under overhead walls for lighter shades of blue water in the distance, indicating air pockets. Dave found one such pocket, took a deep breath, and swam to it solo to make sure it was safe. He can hold his breath for over 4 minutes so this wasn’t really all that dangerous for him apparently. He came back a minute or so later saying it was an easy swim and an unbelievable world inside. 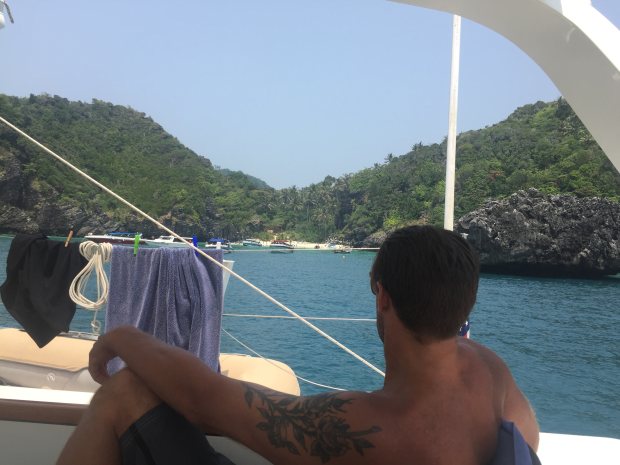 I decided to sit this one out because I was still a bit shaken up from almost drowning a few minutes beforehand. Will, Kelsea, and Dave explored the cave for a few minutes while I paddled around in the water outside. Then Will came back to convince me to come. He said the swim was an easy 20 feet and absolutely worth it. I would have hated myself for being on my dream island and not checking it out, so after a couple minutes of building up the confidence, I took a huge breath and swam as fast as I could through the pitch black underwater passage.

As I emerged from the water I was greeted to a light show put on by our torches touching the walls illuminating a rock dome with bats scattering around irritated by our sudden disturbance. With my snorkel mask on, I dove underwater and revealed a school of thousands of fish spinning in the shape of a 5-meter tornado. At one point, Dave called us over to a tiny cave within the cave he found and pointed his flashlight at about 5 or 6 full size blue and green lobsters. The best part might have been when we decided to turn off our lights and went silent.

With our eyes open there was only darkness in every direction. When I was a child, that was what I imagined death was like. Just…nothing. We quickly turned them back on a little spooked. Even though this cave was stunning, I still couldn’t get the thought of another huge wave filling it up with water, though the size of the cave made it much safer.

Moral Of The Story

Travel gives you the feeling of invincibility. When you do it long enough you feel like you can talk to anyone. Like you can ride a motorcycle forever and planes don’t crash. The cave experience was a good wakeup call to the reality that just because I was in paradise doesn’t mean I was an exception to nature’s rules. But even though I’m no exception, fears must be conquered and I couldn’t swear off caves forever…or in my case…for 5 minutes. 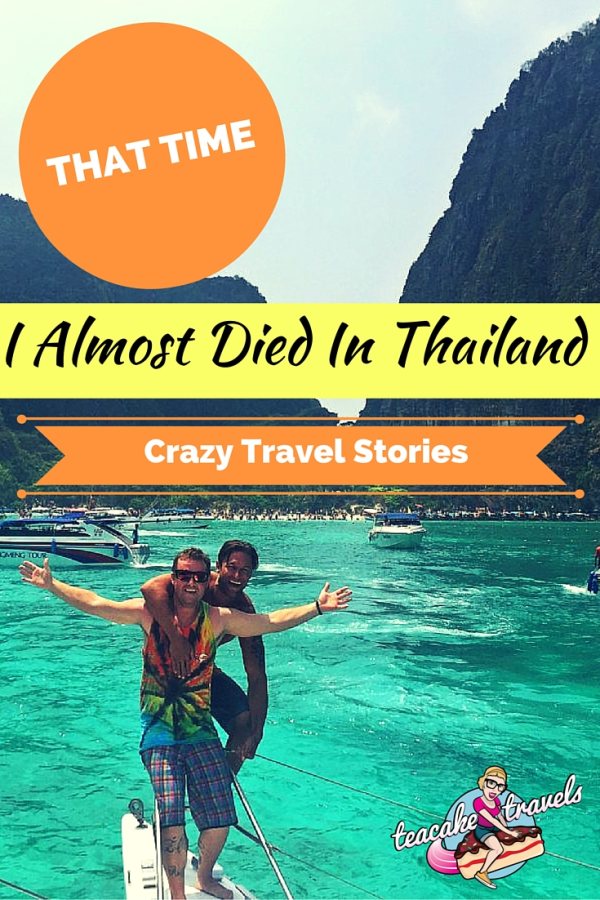 That Time I Almost Died in Thailand