Home » Storytime » Why I March For You, Trump and The Future Of A Peaceful Breakfast

Trump first crash landed onto my radar back in March last year in the peaceful, weed-scented hippy-town of Dali in China. This tango-tastic man kept popping up on the breakfast area’s centrally placed TV, nailed to the wall where everyone could not help but have to see it. Every morning, whilst I sipped my earl-grey tea, he was there. Softly yet boldly in the background. Who was this Trump? What did he want with the world? What was going down with that comb-over?

Irony would have it that I was in Dali for 3 months studying Jiu-Jitsu self-defence techniques for women. Fast-forward 9 months later, and I’m at the Women’s March London to defend you, me and the sisterhood of this planet. 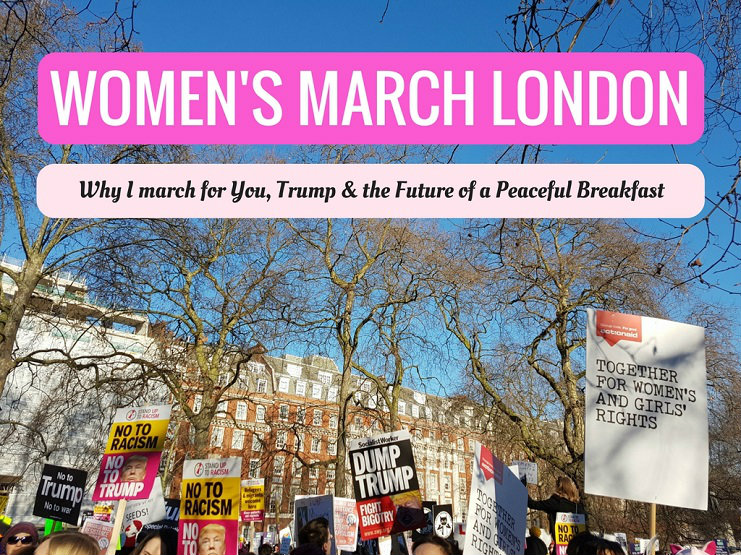 As the days passed in Dali, Trump started to take up more of my breakfast time. He wasn’t just gobbling up the time it took me to drink my tea. He was starting to intrude on my baked beans, my toast, my favourite side serving of grilled mushrooms…and by the end of the 3 months, I couldn’t quite believe that he was trying to get his little hands on my eggs! 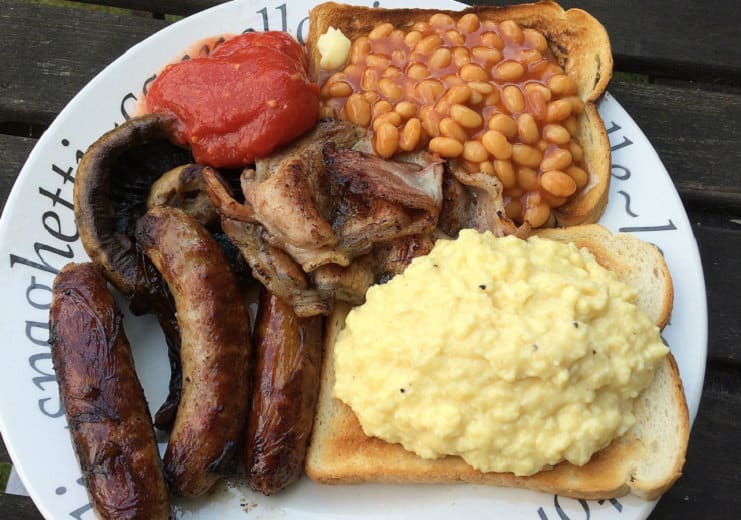 It didn’t stop there. He got greedy. This dude wasn’t waving his patriarchal bull at me at breakfast anymore. It felt like he wanted to come round to mine to freaking eat a full 3 course roast dinner, whilst telling me and my sisterhood how crap we all were. 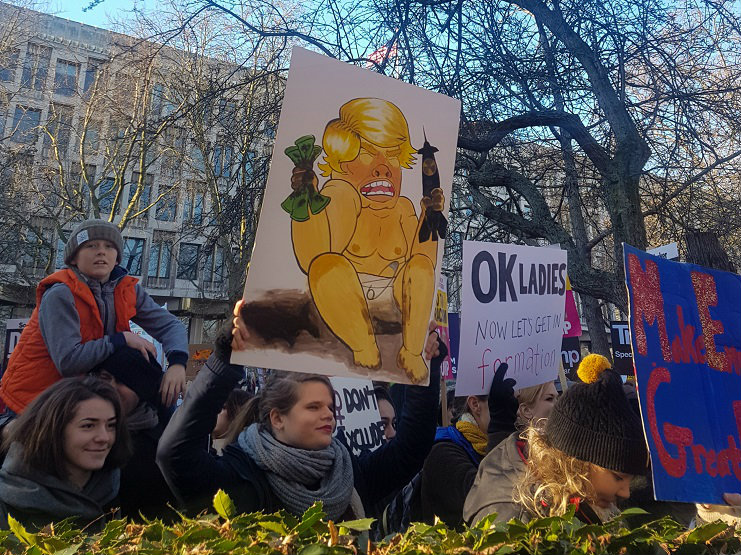 Turn’s Out Trump Might Not Be Down With The Ladies…

He told Fox News’ Megyn Kelly she had ‘blood coming out of her wherever’. He said to Hilary that it was disgusting for a woman to go to the bathroom: you should have seen me and the girls pooping on the side of the road on The Mongol Rally you nincompoop. ‘Sexual assault should be expected for women who serve in the military’ was one of his lines (oh really??!). ‘Muslim women probably aren’t allowed to say anything anyway’ was another (sweet Mother Mary, someone call the purr-purr-purr police)! 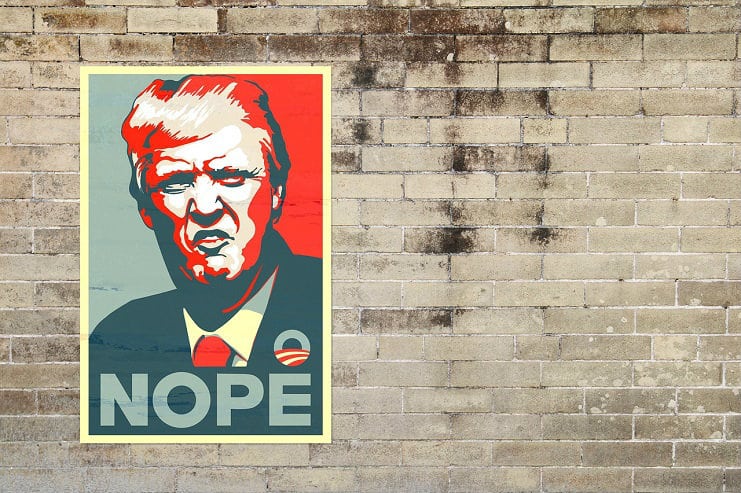 When it got to the point where he told ME that I should be PUNISHED for having an abortion, I wanted to stab him in the frigging temples with my chopsticks. This guy does not deserve dessert! PERIOD!

Sexual Assault Across 3 Generations In My Family

When I was 18 I was sexually assaulted at University. I felt so shocked when it happened that I just didn’t move (something older Teacake wishes she’d done different). When I went to the police and had the guy arrested, he told them ‘I enjoyed it’. That’s how I became a woman (1 in 5 in the UK) who has been sexually assaulted. Who knows if that statistic is fully true however. Only 1 in 6 women report sexual assault. 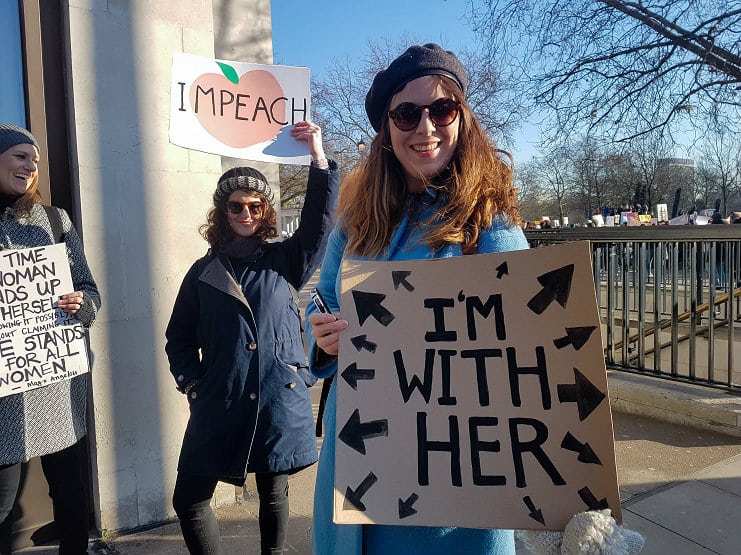 When I was 19, my Nan was repeatedly raped by one of the male staff in her care home. She passed away shortly after. I’m still speechless about this one.

My Mum has little confidence and hasn’t, in my opinion, reached her full potential in life. At the age of 23 I found out why: abused by one of her own family members as a child. 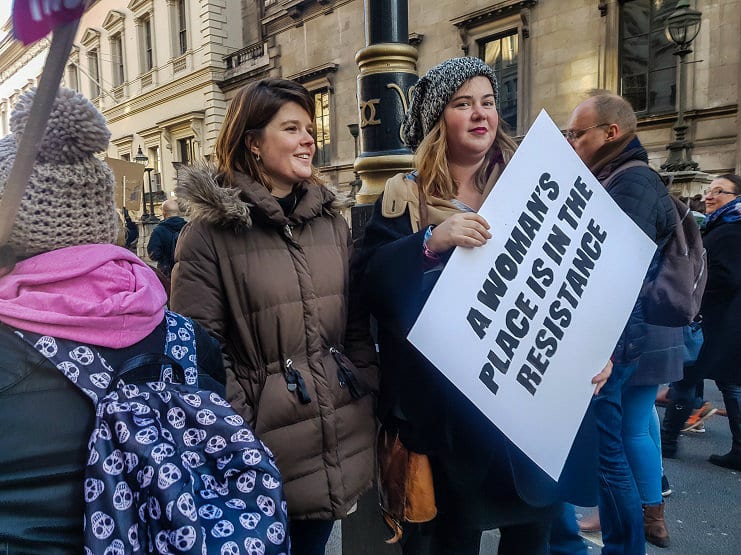 3 women in my family have been disrespected, violated, physically and mentally hurt. Unbelievable. It’s time to make a change. More so than ever before, now that Trump is President Of The United States, holding a megaphone far louder than that ‘background breakfast TV’ in China. A man who clearly does not see women equal to men and a man who got away with daylight sexual assault. No wonder tyrants walk with impunity.

‘There’s Nothing You Can Do About It’

On the day of Trump’s Inauguration, I told myself I wasn’t going to watch that spectacle. No more Trump pushing his way through my goggle box. No more of this crap in my territory. Yet, as I sat there drinking my cup of tea, he appeared thanks to my Father’s touch of the remote. 9 months since I first encountered him in China and he’s clearly not leaving is he? For the next 4 years, I’m going to have to listen to this ogre disrespect my very core. And as he began his speech, I wept.

‘Don’t be like that’ my Father said. ‘There’s nothing you can do about it’. 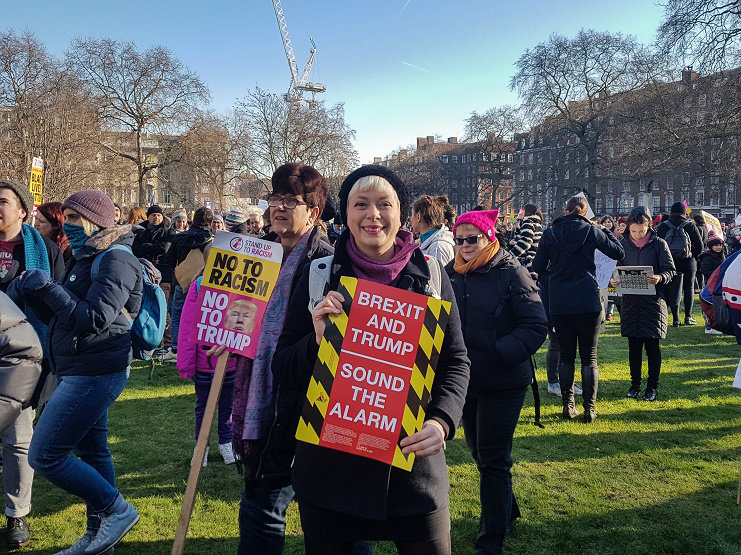 Never tell a woman she can’t do something. Never. Full of passion, love for my sisters and an overwhelming irritability to stand up for my beliefs, I couldn’t sit at home and take this lying down. Sometimes ladies, you gotta fight like a girl. Turns out 100,000 other women at the Women’s March London felt the same…

‘You came by the tens of millions to become a part of a historic movement, the likes of which the world has never seen before’  – Donald Trump on the day of his inauguration

The Awesomeness Of The Women’s March London

I’ve never been to a march before. I wondered if I should bring some mock riot gear in case I got into a spot of bother for speaking my mind. Would the London Police be alright with us all? Would we be alright with the Police?! Turns out the British public, who don’t agree with Trump and believe in equality, are just like you and me. From cute little babies to bodacious OAPs, we were all there together and having a jolly good time!

Just check out all of these lovelies! 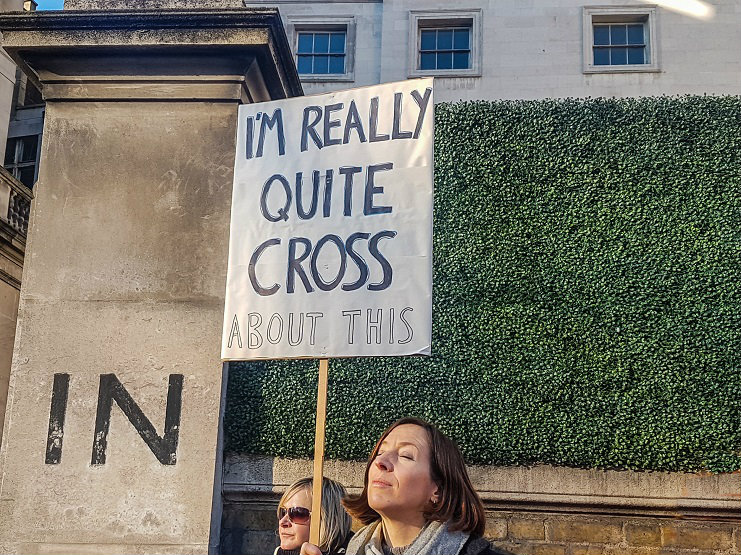 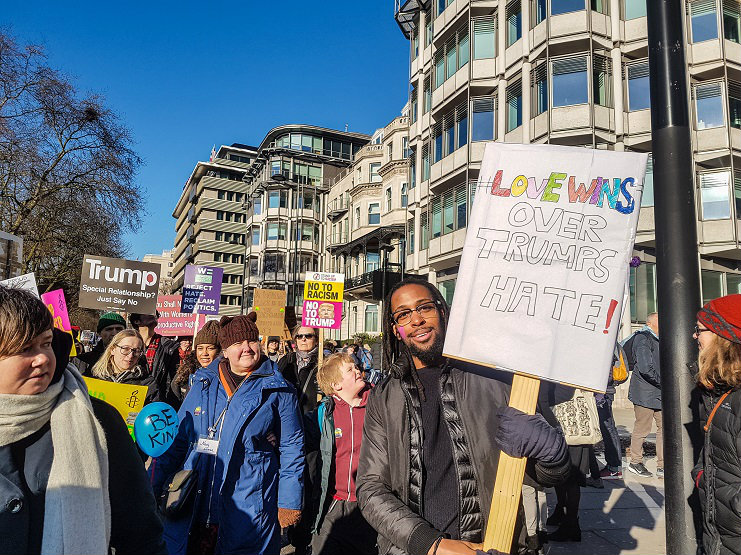 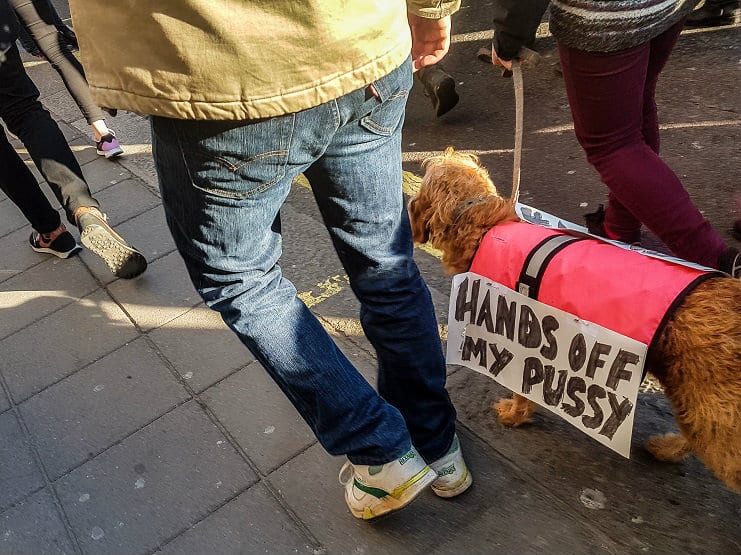 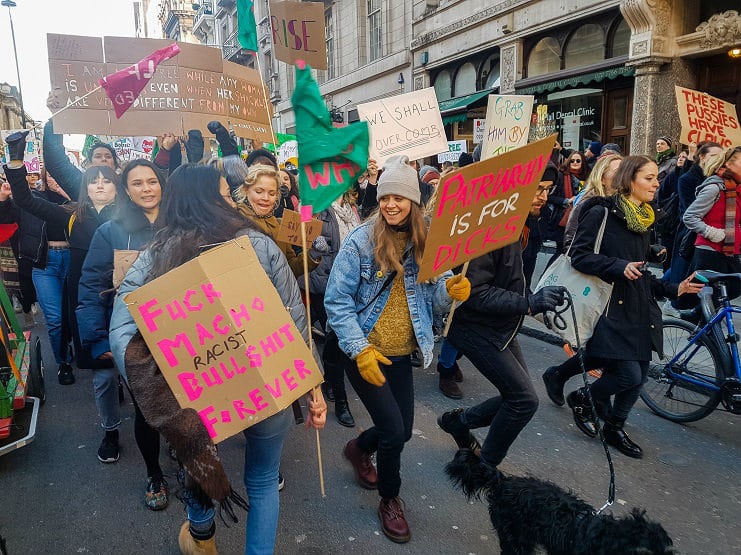 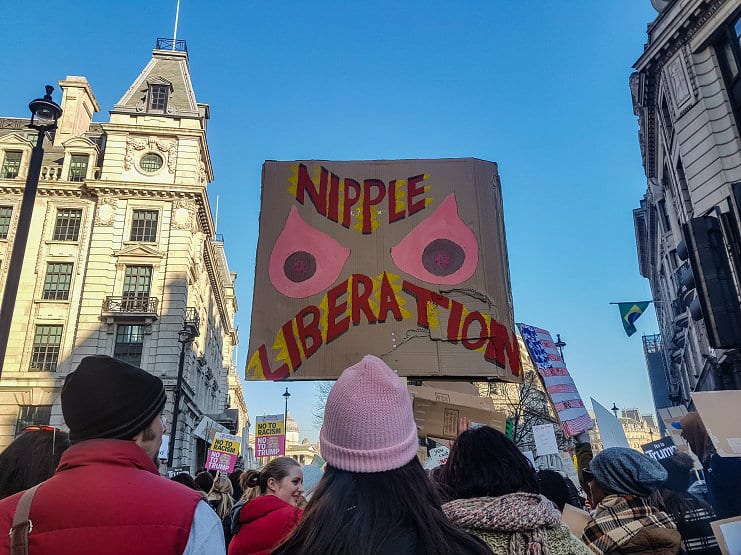 It was when we finally hit Trafalgar Square that I realised how many people had turned up to the Women’s March London. We are united and we believe in better. Better not only for America but for the world at large. Whatever happens now is going to affect everybody.

Hope For The Future 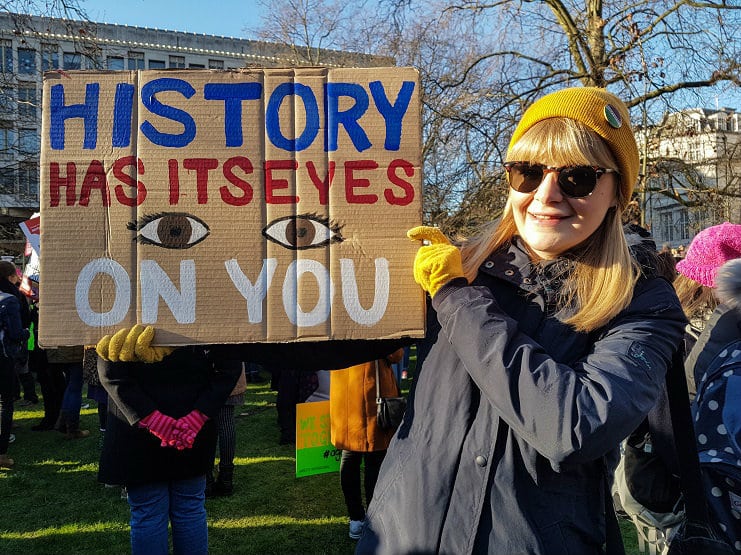 What happened at the Women’s March London is historically significant. Not only were there 100,000 marching in London, there were marches in Belfast, Cardiff, Edinburgh, Lancaster, Leeds, Liverpool, Manchester and Bristol too. This turnout cannot be ignored. Worldwide it was insane!

This is just the start of an incredibly and long painful process however. As some of the older ladies in our crowd said yesterday, ‘I still can’t believe I’m protesting this s**t’. Keep on speaking your mind ladies and Trump won’t be making it to your sausages.

Were You At The Women’s March London? Are You Pro Or Anti Trump? Spill The Beans In The Comments!

Save This Pin For Later! 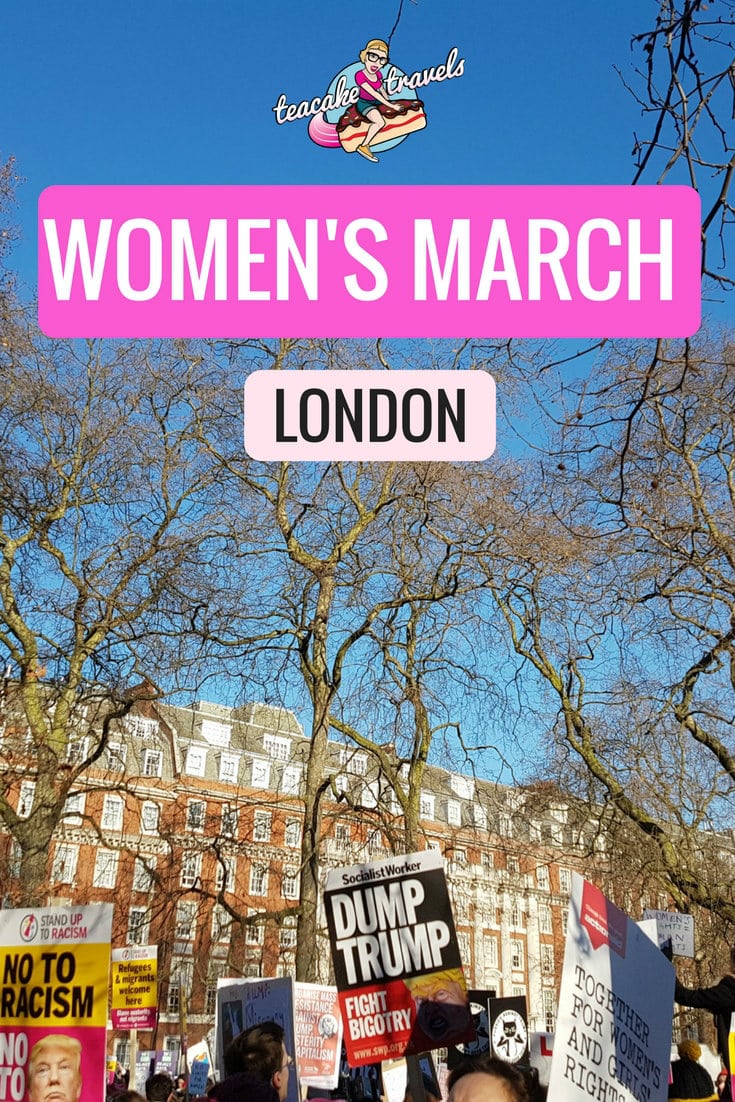 Why I March For You, Trump and The Future Of A Peaceful Breakfast