What Is Coca Cola Doing To Change Women’s Lives In Vietnam?

You are here: Home1 / Destinations2 / Vietnam3 / What Is Coca Cola Doing To Change Women’s Lives In Vietnam?

Never underestimate the power of a woman. If she has the resources to be the best she can be, she will show you just how goddamn kick ass she really is. Many local women are finding their inner warrior right now in Vietnam thanks to the work of Coca Cola and their partners. Coca Cola haven’t always had the best reputation and I did have my reservations, but hear me out…they invited me to see what they’re up to with their latest Ekocenter project and oh boy, I’m impressed! 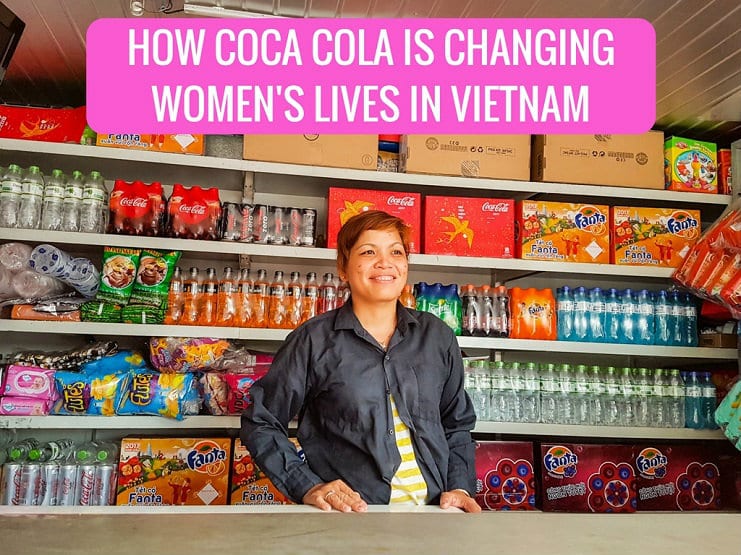 Women have it tough in this world. Even in the Western World, let alone the Eastern World, some men still think we can’t do business as good as them. Well, Coca Cola really do believe in women. They believe in women so much, that their latest project, Ekocenter, only employs women!

Ekocenter is a place where the local community can meet to get free access to safe drinking water, the internet, free medical check-ups, sports activities and a whole ton of training in business, financial, computer and language skills to improve their well-being. Coca Cola decided to create these solar-powered Ekocenters in places where communities need it the most. We’re talking about places which didn’t originally have access to basic utilities at all! 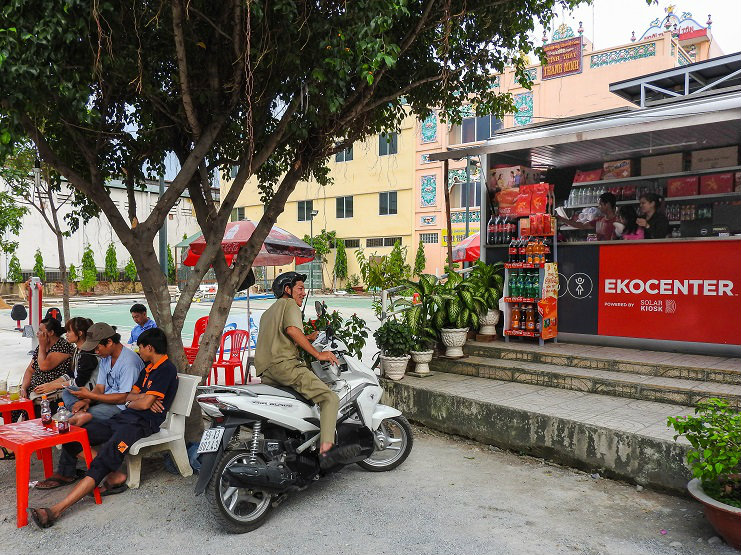 Ekocenters have been hugely successful in Kenya, Tanzania, Rwanda, Ethiopia and Ghana and they’re rapidly expanding in Vietnam. By the end of 2017, there should be 12 more centres coming up!

The best part about the Ekocenters from a Teacake point of view? They’re run by local women entrepreneurs. Badass. The numbers running an Ekocenter vary from 1 to around 4 and they are all willing to learn how to be a girl boss. 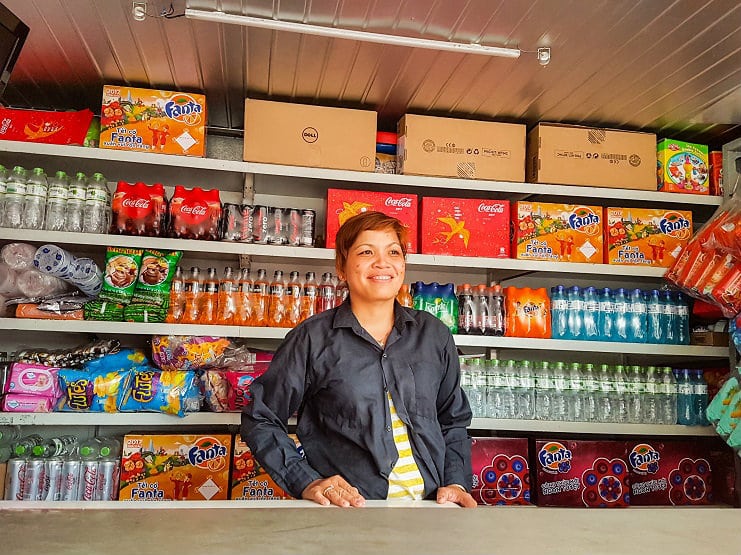 What Is Ekocenter Doing To Be Sustainable?

There’s nothing worse then businesses going into corporate social responsibility just to ‘look good’ then pull out and leave people to it without any backup. From what I can see, Coca Cola has it sorted. They’ve partnered with other businesses, the Vietnamese government and civil society. Everyone is eager to put their expertise and resources together and it shows. Here’s what’s going down: 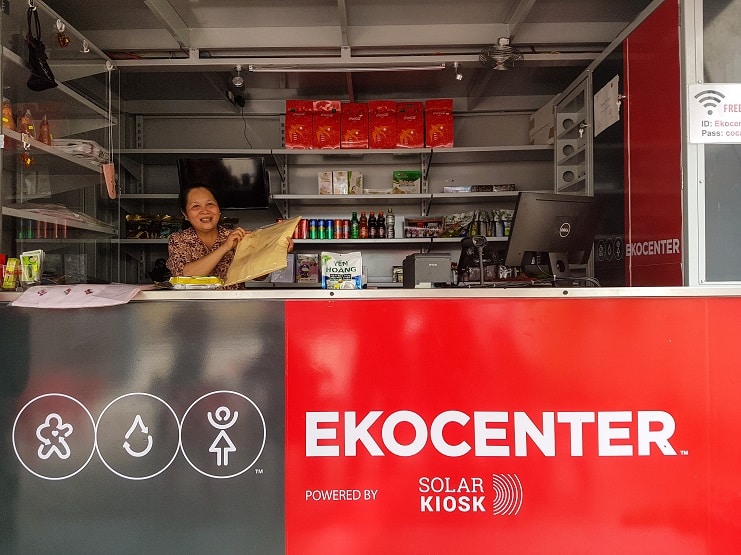 What is Ekocenter doing to create girl power? Coca Cola are working with the Vietnam Women’s Union and the Vietnam Women Entrepreneurs Council to train female operators  to build up a strong business model so that they can make good stable incomes running the Ekocenters.

They run it for 2 years, gain the skills and experience they need, then hand the Ekocenter over to another budding woman entrepreneur. They go off to start their own business, whilst continuing to mentor the new owner. It’s a sustainable ongoing circle of learning good practices and exchanging experiences: women helping other women, the community taking complete control of the project itself. Sisterhood united! 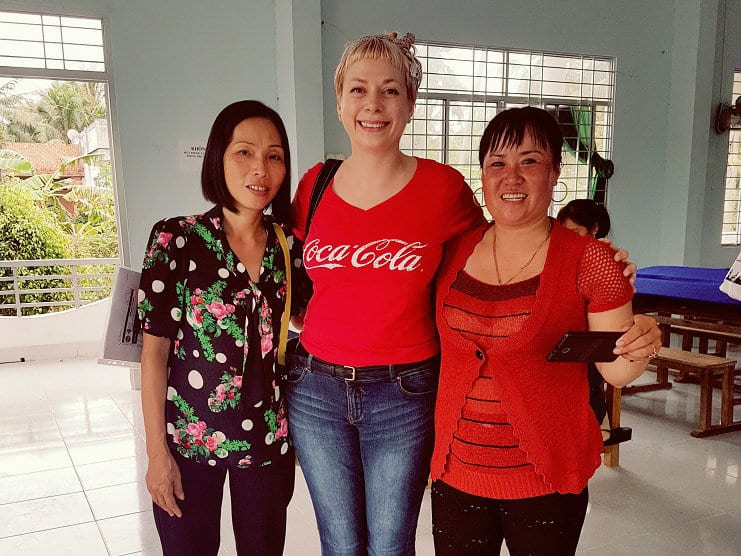 Woman on the right: ‘I have six cows now! I had eight but sold two’. Haha. You go girl. You go.

One amazing project going down at the Ekocenter in Bến Tre is the Mekong Vitality Project. This project, with the help of the United States Agency for International Development (USAID), is all about empowering women and strengthening their social and economic status by teaching them how to manage loans, save money and develop a small business with their money.

I am so proud of these women! They meet weekly and are a tight knit community, learning from each other, lending money to each other and supporting each other to become the best they can be.

After 3 years, 40% of members have started a new business or expanded their existing one, 50% of increased their role in family decision-making by choosing how they will make money and choosing what they buy and 20% have taken on leadership roles within their community. These women now own land, cows, can lend money to others and are helping each other as best they can. 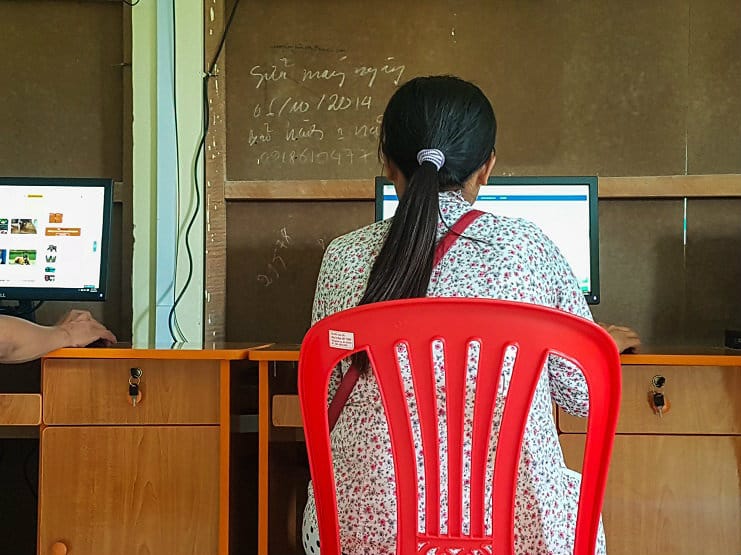 Dell and Microsoft are fully involved by contributing computer software and hardware so that the local ladies (and guys!) can improve their computer skills and take part in English and cultural classes. 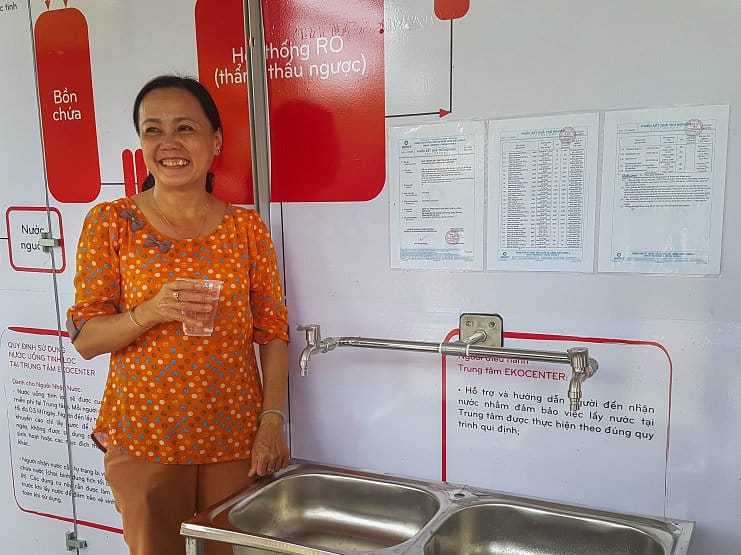 If you can get Coca Cola everywhere, why can’t you get clean drinking water everywhere? Coca Cola is on a mission to safely return to communities and nature the amount of water equal to what they use in their finished beverages. It’s taking time but they’re working hard on it. Coca Cola is working with the World Wildlife Fund (WWF), the United Nations Human Settlements Programme and the Research Center for Family Health & Community Development (CEFACOM) to organise Clean Water For Communities.

They’re providing access to the main water supply system in neighbourhoods around the Coca Cola plants in Vietnam, prioritising families at or near the poverty level and veterans.

They’re also teaching locals through meetings at the community centres, how to use water wisely and be safe and healthy through sanitation.

What Is Ekocenter Doing To Protect The Environment? 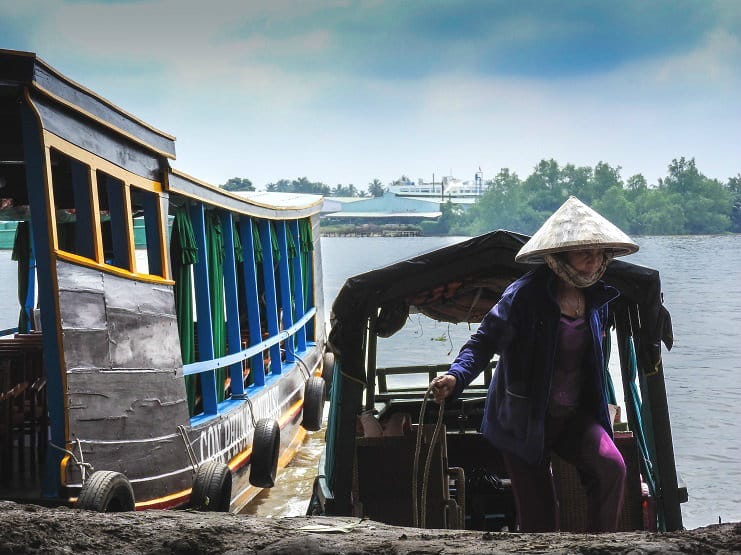 What is Ekocenter and Coca Cola doing for the environment? Trust me, climate change is for real. So much so, that the Mekong Delta in Vietnam is in serious trouble. Sea levels are rising and as a result the river water where they grow their crops is becoming more and more salinated. Salinated water = no crops. Hell, there’s not even enough fresh water to drink. Serious stuff.

In Tram Chim National Park, not only is 75% of the population’s livelihoods being affected but we’ve got a ton of birds and fish in there who are not happy either with the results of climate change. Through the amazing work of WWF, 10 billion litres of freshwater is being replenished annually through improved hydrological regime management practices and the income of the households has increased by 20% by participating in resources programmes. 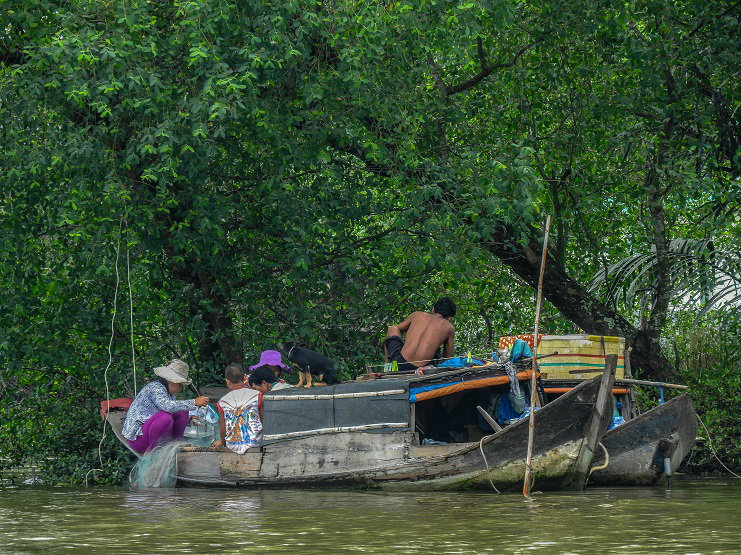 At the Ekocenter, 8000 litres of salinated water is being turned into 6000 litres of fresh clean water everyday thanks to the technology that Coca Cola, its partners and the Industry University of Ho Chi Minh City has been working on.

How Are Other Local Businesses Being Affected? 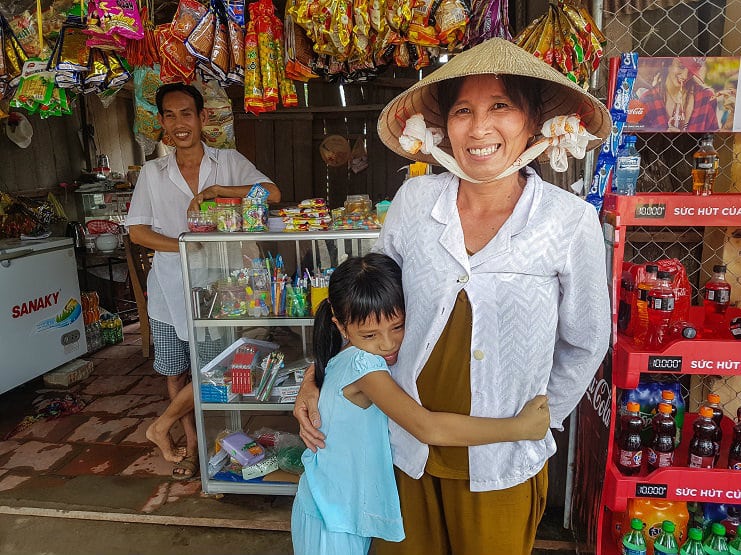 At the Ben Tre Ekocenter was this lady’s shop directly across the road. What is Ekocenter doing for the rest of the businesses in the community? I couldn’t help but pop over there to ask her. She clearly sells Coca Cola and other beverages. Was she being affected? She told me that she loves the Ekocenter as she is getting fresh drinking water from it everyday for her family and many more people are coming to her shop as they visit the area more than before. Win win.

The Power Of A Woman Employee

Back in Coca Cola HQ where the business people are hanging out, Coca Cola is standing by its girl power beliefs. There’s no denying that women kick ass in business and know how to work well with others.

Coca Cola want to sell their product as best they can in the community and have found that by employing 2 local women to be the sales representatives in each area that they operate, they can sell very well.

The women sales representatives are well-known in the community and can split the shift between them to still be at home to take their kids to school, cook lunch and dinner and be back to pick their kids up, whilst fulfilling their sales duties for Coca Cola. Women need flexible part-time jobs like this!

Coca Cola’s training programme for women is different to their programme for men. They spend a lot of time increasing the women’s confidence within themselves, to tell them that they CAN dream big, that it is possible to work and be a good Mother and Wife and it is also OK to fail. These women are becoming empowered as they are able to contribute to the household income, have a bigger voice in the family and also treat themselves to items they would have felt too guilty to buy for themselves before. 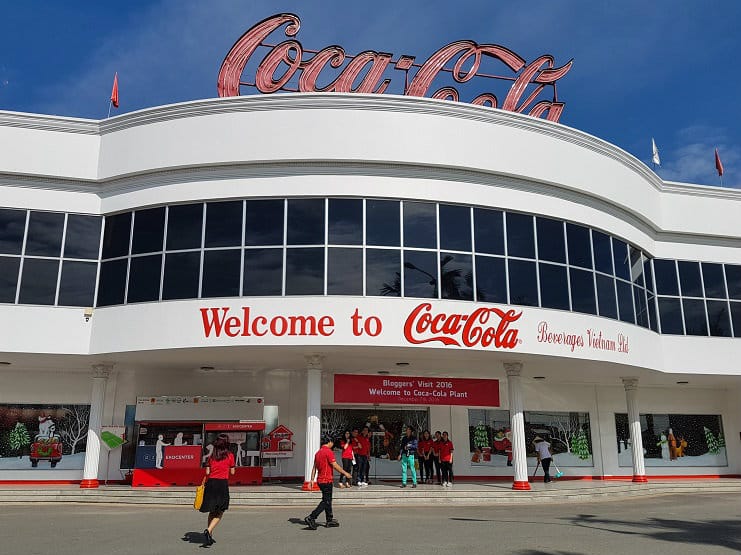 What is Ekocenter Coca Cola doing for themselves? Let’s talk straight about this. Coca Cola at the end of the day is a business, not a charity. Coca Cola want to maximise their profit whilst being a force for social good and one way to do this is to alleviate health problems, improve living standards and create a community which is independent, thriving and affluent. Happy, healthy, stable locals are going to have more money to spend and with Coca Cola at the forefront of the locals, everyone is on a roll.

What is Ekocenter going to be like in the future? I’m going to be keeping a keen eye on Coca Cola’s Ekocenters in the future and I hope that they continue to be a success. I personally think that both sides are winning with the implementation of these Ekocenters and even though Coca Cola has made mistakes in the past, I believe they are showing they can be a force for social good. Keep on rocking ladies!

Have A Question? Pop A Comment Below And I’ll Do My Best To Answer 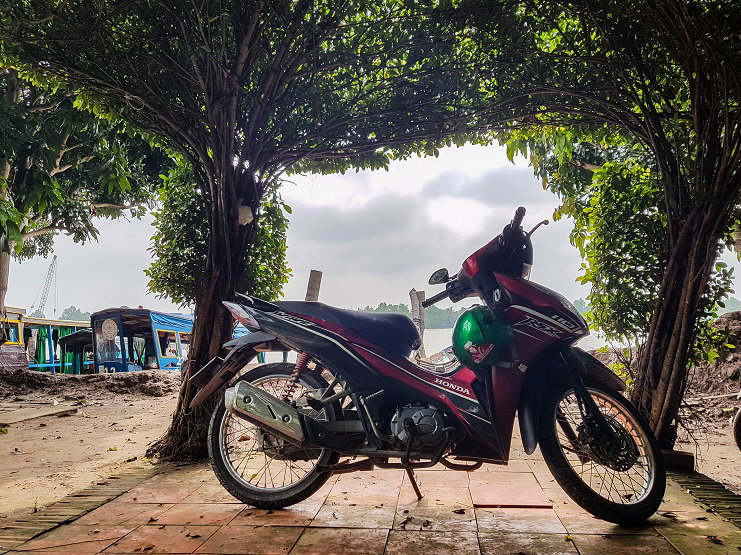 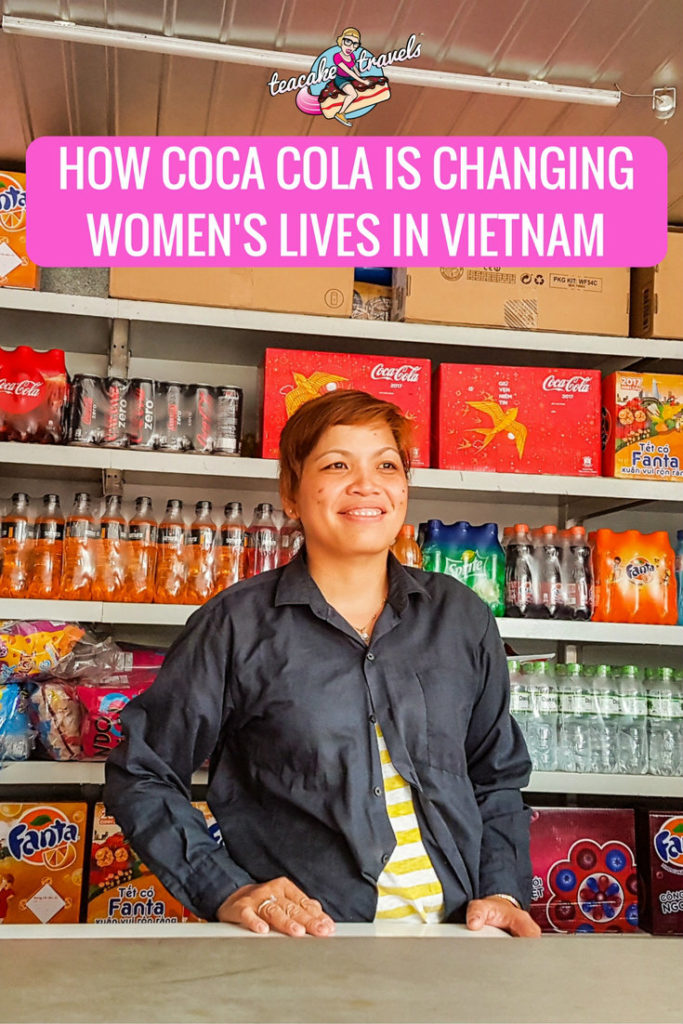 Tucking Into A Plate Of Perfect Pad Thai

How To Find The Perfect Glasses For Travelling
Scroll to top